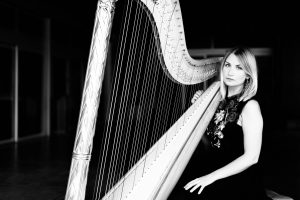 Gabriella Emmanuelle Garcia was born in 1992 in Varna (Bulgaria) but she grows up and studies in Belgium. She defends bachelor and master degrees at the Institut Supérieur de Musique et de Pédagogie in Namur in the class of the prominent Belgian harpist Sophie Hallynck. At the same time, she is studying Erasmus in the class of Ghislaine Petit-Volta in Paris. She earns a degree in Music Performance at the École Normale de Musique de Paris in the class of Nicolas Tulliez.

After that she won the position of harpist at the Ruse State Opera and Philharmonic Orchestra of Ruse in Bulgaria. She has won awards from international competitions and performs regularly as a soloist and in chamber music in Belgium, Luxembourg, France, Italy, the Netherlands and Bulgaria. She plays in many orchestras as The Bulgarian National Radio Symphony Orchestra, The “Orchestre des Gardiens de la Paix ” of Paris (France), The Royal Philharmonic Orchestra of Liège (Belgium), The State Opera Plovdiv with great artists such as Boris Belkin, José Cura, Sonya Yoncheva, Svetlin Roussev, Kiril Manolov… etc.

In 2018, she took part of the recording of the soundtrack of the orchestral music for the film “The Other Side of the Wind,” composed by Michel Legrand.
In 2021, she won the Crystal Lyra of Classic Fm Bulgaria, category chamber music, with the Ensemble Carnevale, Sofia (Bg)
As a teacher, Gabriella gives often masterclasses in Belgium, Bulgaria, Italy, Germany…
Since 2019 she is teaching at the Harpcenter Brussels.
Pic by Barbara Salomé Felgenhauer
Scroll Up